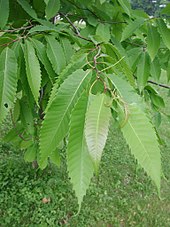 The American chestnut tree survived all adversaries for 40 million years, then disappeared within 40. More than a century ago, nearly 4 billion American chestnut trees were growing in the eastern U.S. They were among the largest, tallest, and fastest-growing trees. The wood was rot-resistant, straight-grained, and suitable for furniture, fencing, and building. The nuts fed billions of birds and animals. It was almost a perfect tree, that is, until a blight fungus killed it more than a century ago. The chestnut blight has been called the greatest ecological disaster to strike the world’s forests in all of history.